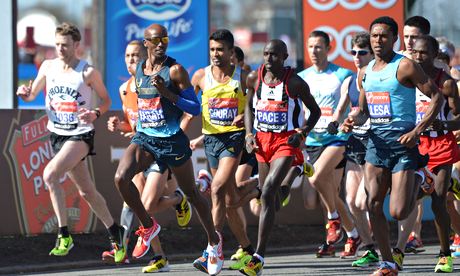 Poor old Pheidippides. The original marathon man ran from the battlefield of Marathon to Athens and died from his exertions. If only he’d had the right gear. Tragically, compression tights made of supportive memory fabric with state-of-the-art temperature management and engineered gradient systems that enhance the blood flow and reduce lactic acid buildup were not available in 490BC.

Nor was a GPS watch connected wirelessly to a heart-rate monitor and a satellite system supplying data to an analytical website tracking everything from gradient to wind speed. Nor were carbohydrate gels, whey protein shakes, caffeine blocks or beetroot shots.

The uninitiated could be forgiven for thinking that running has changed little since Pheidippides’s fatal first marathon. But, as the large crowds milling around last week’s London Marathon expo confirmed, things have moved on in the past 2,500 years. For every runner yearning to return to natural running and reconnect with their former hunter-gatherer selves, there are plenty more seduced by the latest performance-boosting products flooding the market.

Their faith in innovation is not misplaced. Man is irrefutably getting quicker. In 1896 the fastest time for a marathon stood at 2:58:50. Today the record, set by Kenya’s Wilson Kipsang in Berlin last year, is down to a jaw-dropping 2:03:23. Kipsang will be running in London in one of the most eagerly anticipated races in history. It features an all-star cast, including last year’s winner, Ethiopia’s Tsegaye Kebede; the London course record holder, Kenyan Emmanuel Mutai; the Olympic champion, Stephen Kiprotic from Uganda; and, of course, Mo Farah, who is on course to break the British record.

The fact that almost an hour has been slashed off marathon times in little more than a century suggests that running is benefiting from the application of new scientific and technological approaches. But experts counsel against swallowing this line unquestioningly. John Brewer, who is professor of sport at the University of Bedfordshire and the exercise nutrition adviser for the London Marathon, points out that more people than ever are running marathons. Last year, for the first time, six marathons – New York City, Chicago, Paris, Berlin, Tokyo and London – had more than 34,000 finishers, while 31 marathons worldwide had more than 10,000 finishers. Marathon running is no longer a niche sport.

“Inevitably, with a broader base, you will get more people developing and getting through to the highest level,” Brewer said.

It is at the elite level, where geography and science have collided, that there has been the most noticeable improvement in performance.

“There has been an increase in the domination of Kenyan, Ethiopian and Tanzanian athletes who have really pushed the boundaries of elite running,” Brewer said. “But they’ve also been exposed to the top-level coaching. They’ve come over and lived in America and this country; they’ve had access to sports science and sports nutrition.”

Dr Steve Ingham, director of science and technical development at the English Institute of Sport, which worked with most of Team GB’s Olympic and Paralympic medallists at the 2012 Games, said east African runners had a clear physiological advantage when it came to distance running: “The calf and the lower shank of the leg are extraordinarily thin and slim on most east African runners. What that means is when they are swinging their leg forward in the recovery phase of a running action, there is a much smaller cost to that movement, so the efficiency of running is much better.”

But this is not to say anyone born outside the Great Rift Valley should despair. “Give me an athlete, and a sports scientist should be able to make them go faster,” Ingham said. On his blog, he plots a graph tracking the deployment of physiologists against medal positions at the 2012 Games. The bottom line? The more physiologists – scientists who study the performance of the body – the more golds.

And now much of what the elite athletes have learned is being shared with mere mortals. In terms of nutrition, Brewer believes the great breakthrough came in the 1970s, when the running world turned away from high-protein diets. “There was a realisation that carbohydrate, which comes from starch and sugars and is stored in the muscles as glycogen, is effectively the petrol for marathon running. If you could manipulate your diet, so that you could boost those glycogen stores, then maybe you could enhance your performance. Maybe by only one or two percentage points but that could be one or two minutes.”

The evolution of isotonic drinks has also helped.

“The science will show they provide the optimal rate of both fluid and fuel,” Brewer said. “It could be the difference between really struggling over the last three or four miles and getting over the finishing line before you dehydrate.

High-carbohydrate gels can play a part, too. The average marathon runner can make it around 17 miles before they run out of fuel. A typical gel will supply enough fuel for a mile of running. Physiologists have a tried and tested theory for bridging the gap.

“The secret is a combination of training and pacing. The training will get you more aerobically fit, and the pacing will make sure that you set off at a lower percentage than your maximum. So you will burn a bit of fat as well as carbohydrate. Most of us have enough fat for about 40 consecutive marathons! The problem is that the body doesn’t draw on fat when you are running because it can’t supply fuel at a fast enough rate. But if you set off slowly, you can supplement the glycogen with some fat, so instead of using up your carbohydrate stores you might be able to get them to 21 miles or beyond.”

Tests can determine a runner’s lactate threshold – the point at which debilitating lactate in the blood begins to accumulate during exercise – as well as the maximum amount of oxygen they can consume, known as VO2 max. Fitter runners have higher VO2 max values and can exercise more intensely.

And then there are the gadgets. It cannot be long before some runners start copying Farah and sleeping in oxygen tents on the nights leading up to a big race. And many runners swear by their GPS watches and heart-rate monitors.

So would they all benefit if they spent £3,000 on a hypoxic generator? Surprisingly, Ingham believes that for around half, the answer is yes. But how much of this improvement is physiological and how much psychological is debatable.

“The mere presence of somebody with perceived expertise makes a runner feel a personalised benefit akin to a placebo,” Ingham said. “You put fancy gizmos on somebody, look like you’re a scientist, nod several times and say, ‘why don’t you try this?’.”

But as Farah, a man who spends large parts of his life altitude training and is surrounded by the world’s best sports physiologists, knows better than anyone, science can get you only so far.

Although he will have pacemakers , he will be running without a watch. “I’ll just go with the feeling,” he said.