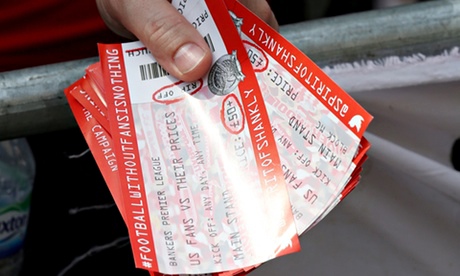 Ticket prices have been the subject of concerted protests in recent years. Photograph: Graeme Robertson

For this forthcoming 2014-15 season, a handful of clubs (see table), including Tottenham Hotspur, Swansea City and West Bromwich Albion, have frozen ticket prices at the same level as last season. Manchester City, the Premier League champions bankrolled by the Abu Dhabi oil fortune of Sheikh Mansour, stand out with a benevolent £299 cheapest adult season ticket, which bears comparison with prices through football’s history when the sport was built and fondly referred to as “the people’s game”. Such tickets are limited, however, and prices at the Etihad Stadium go up to a high of £860 while matchday ticket costs, yet to be confirmed, were the target of complaints from some away fans last season.

Arsenal, whose £62 away-ticket price sparked a near-boycott by City fans when the two clubs met last season, will, as ever in modern times, be pricey to support. The cheapest adult season ticket at the Emirates Stadium is £1,020 – although that includes early-round cup matches, making for 26 games in total. The most expensive tickets, at a club that began building its new stadium in 2004 with the express aim of maximising income from more supporters, are more than £2,000 for a ticket and £129.50 for the most expensive single matchday ticket.

Such prices charged to supporters for watching their English clubs are a culture change from the century of the game’s development that passed before the First Division clubs broke away from the Football League, forming the Premier League and keep all ofing the money from the new pay-TV deal in 1992.

In the 1989-90 season, for example, during which Lord Justice Taylor produced his final report on the wider issue of football ground safety, there were thousands of tickets in Old Trafford’s standing accommodation where fans could watch Manchester United against top opposition for £3.50. Adjusted for retail-price inflation in the 24 years since, that ticket would now cost £6.94, just under a 100% increase. United’s lowest-priced ticket for this season, of which there are very many fewer than in the days of standing, will be £31.

That is cheap compared to £65.50 at Arsenal (for the highest category games), £55 at West Ham United with several clubs charging more, but United’s £31 price nevertheless represents a 785% increase since 1990.

At Liverpool, where prices have been increased significantly since the 2010 takeover of the then financially-troubled club by John Henry’s Boston-based Fenway Sports Group, the 1989-90 cheapest ticket price, accommodating thousands of fans on the Kop, was £4. This season, Liverpool’s cheapest matchday ticket will be £46, an increase of 1,150%.

Liverpool’s cheapest Anfield season ticket is £710, significantly more than at City, United and all clubs outside London; in fact it is the Premier League’s fourth most expensive lowest-priced season ticket after Arsenal’s £1,020 (for 26 matches), Chelsea’s £750 and the £745 that Tottenham Hotspur charge at White Hart Lane. Liverpool’s chief executive, Ian Ayre, has made it clear that the expansion of Anfield, for which preparatory work has begun with the demolition of surrounding houses, will be aimed at making more money for the club from fans, not reducing prices.

Kevin Miles, the FSF’s chief executive, describes high pricing as one issue which unites modern supporters, most of whom grew up and became loyal to their clubs in the pre-Premier League era. “There is an assumption that football has become a middle-class pastime, but I don’t necessarily see that,” said Miles. “I see traditional supporters stretching themselves, paying prices they think are unreasonable, to do the thing they love. It is such a captive market, clubs can squeeze people in a way other businesses can’t.”

Premier League clubs point to family sections that offer reduced ticket prices for both parents and children, and more clubs are now not charging fans full price at 16. Several, including Everton, Newcastle United, Manchester United and Hull City, have a concession or student price up to 20 or 21. The FSF argues that many people of that age are still students, on apprenticeships or in low-paid jobs and that football, which was celebrated as a constant in young adults’ lives, is now largely pricing them out.

The Premier League acknowledges that the average age of a Premier League club supporter is 41, but has claimed that young people are not priced out, that the highest proportion of fans are young, around 10% are from an ethnic minority background and “around a quarter” are women. However, these percentages are not a picture of the crowds regularly attending matches on a given weekend, where nothing like that proportion of women or ethnic minority fans are seen in grounds.

In fact, a Premier League spokesman has explained that the figure takes a total of all people who have attended a single match across a whole season, taking no account of how often each went, then calculates the percentages of young people, women and ethnic minority attendees.

In Germany the football association and Bundesliga have maintained standing areas throughout, and insisted on keeping the game affordable for the young and less well off who have long been the backbone of support. This season at Bayern Munich, still 75% owned by supporters, Bundesliga champions, 2013 Champions League winners and suppliers of the bulk of Joachim Löw’s World Cup-winning team, thousands of fan-members can buy a season ticket to stand for €144 (£114).

Here, the fans are marching on Premier League HQ to keep alive the tradition that football is not a business that should charge its followers whatever it can, but a game that belongs to everybody.